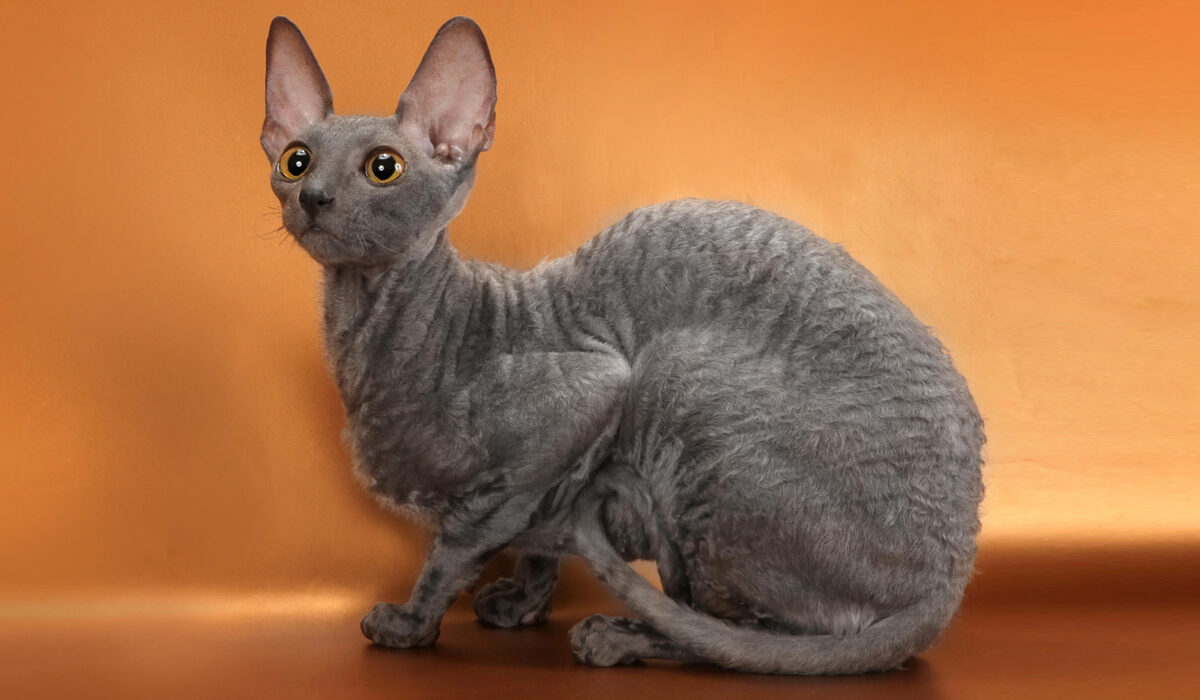 Imagine if a Whippet turned into a cat—and, along the way, it decided to get a perm. That’s the overall look of a Cornish Rex, a rangy feline with curly fur that originally hails from Cornwall in southwest England. Here are eight facts about the kitty, which was named America’s 12th most popular cat by the Cat Fanciers’ Association (CFA) in 2014.

1. THE FIRST CORNISH REX WAS A FARM CAT NAMED KALLIBUNKER.

In 1950, a woman named Nina Ennismore who lived in Cornwall, England, discovered that her domestic British shorthair had given birth to a quirky-looking male kitten with tightly curled fur. As the cat grew older, he also developed big, bat-like ears, and a lithe frame reminiscent of an English Greyhound.

Rumors swirled that radiation from the local tin mines had caused the kitten’s odd appearance. However, Ennismore, who named the kitty Kallibunker, consulted with a geneticist, who told her that Kallibunker’s odd appearance stemmed from a genetic mutation, and recommended that she breed him back with his mother to perpetuate the look. Kallibunker sired more curly-haired kittens, and voila—a new breed was born. Since Ennismore also bred curly-haired Rex rabbits, she decided to name her cats the Cornish Rex in honor of their bunny counterparts and place of origin.

Over the years, breeders have outcrossed the Cornish Rex breed with other types of cats, including Siamese, Burmese, Russian Blue, and British Shorthairs, to improve the Rex’s health and stamina.

Scientists from the Lyons Feline Genetics Research Laboratory have discovered the recessive mutation that’s responsible for the Cornish Rex’s tightly curled coat. The mutation reportedly affects the function of a gene that’s responsible for hair formation and maintenance. The researchers are working on an official paper detailing their findings, and they also offer a DNA test so that Cornish Rex breeders can confirm that all cats they mate carry this particular gene.

3. THE CORNISH REX IS CURLY ALL OVER.

Since the Cornish Rex’s fur is reminiscent of a tightly-waved retro hairstyle called Marcel waves, the kitties were once nicknamed Marcel cats. However, a Cornish Rex’s tight curls aren’t limited to its coat—the cat also has curly whiskers and eyebrows. Watch out, poodles!

4. THE CORNISH REX IS NOT HYPOALLERGENIC.

Sorry, cat lovers with allergies: the Cornish Rex’s short, downy fur doesn’t make it hypoallergenic. When a kitty walks into the room and you start sniffling and tearing up, you’re not actually reacting to its coat. The real source of most peoples’ discomfort is the Fel d 1 glycoprotein, which cats emit from the sebaceous glands of the skin, saliva, and urine. While some people with allergies may experience fewer symptoms with cats that shed less, a Cornish Rex kitty isn’t the solution to your woes.

5. THE CORNISH REX HAS AN UNUSUALLY PROPORTIONED BODY.

The Cornish Rex is often compared to a Greyhound, thanks to its tucked-up stomach, arched back, long legs, and tiny waist. It also has a noticeably large, egg-shaped head that’s about one-third longer than it is wide.

Most kitties have a fur coat that consists of a longer outer layer, a middle layer, and a downy undercoat. Cornish Rex cats only have the undercoat—meaning they’re often much more temperature-sensitive than the average cat. Make sure to provide them with plenty of cozy sleeping spaces during the winter, but also keep in mind that that they can get overheated in a too-warm house.

7. CORNISH REX CATS COME IN ALL KINDS OF COLORS.

Cornish Rex cats can have blue, gold, green, or blue-green eyes. As for their coats, the breed comes in a wide assortment of solid colors, including white, black, chocolate, orange, blue, and lilac. You’ll also find tabby, tortoiseshell, bicolor, and shaded silver and gold Cornish Rexes.

Looking for an energetic pet that will play fetch, snuggle with you, and follow you around the house? If you’re more into cats than dogs, consider the Cornish Rex.