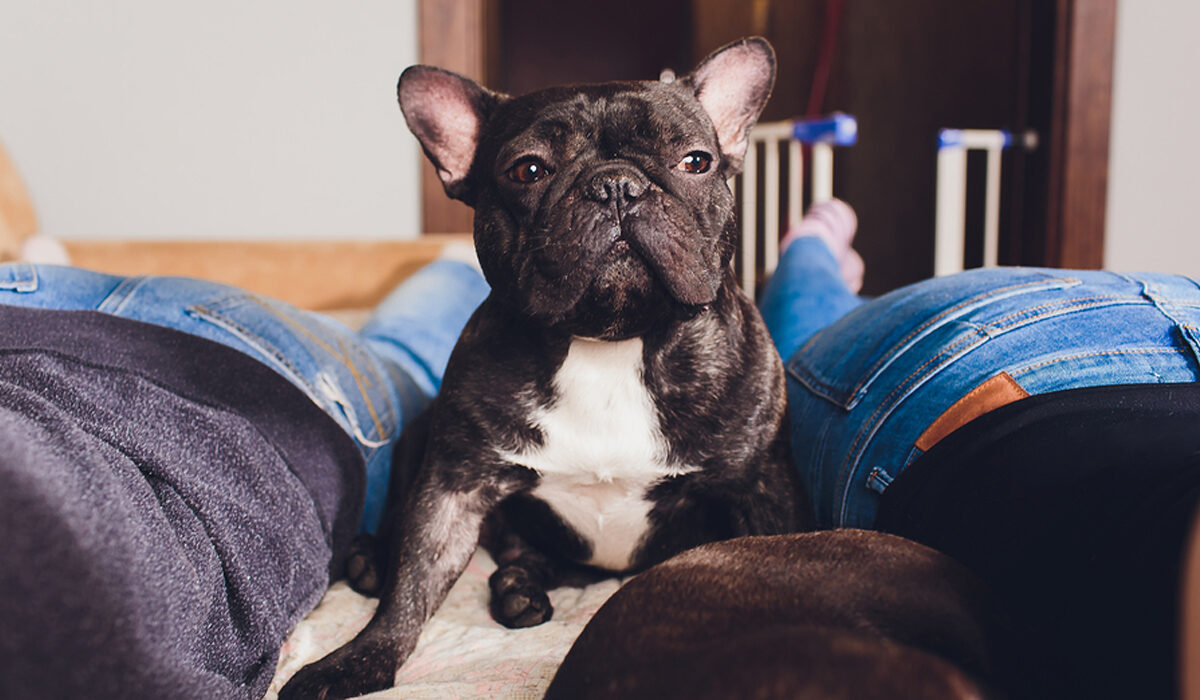 Why is my Frenchie farting so much?

You’re sitting on the couch with your Frenchie when suddenly, you smell something rancid. Did you forget to take out the trash? Is it me? Nope, that’s just your Frenchie farting up a storm. I’m sure you can relate.

Flatulence, or gassiness, is a common issue that many French Bulldogs suffer from. It’s not so much that the French Bulldogs are suffering, but instead us humans that have to deal with that unbearable stench.

A few farts here and there can be funny, but excessive gas can make it hard to be around your Frenchie. Luckily these rancid farts are usually nothing to worry about; Bulldogs are just gassy.

You might be asking yourself, ”Why does my French Bulldog fart so much?!”; much more than any other breed I’ve been around at least. This is due to their extremely sensitive stomachs.

Farting in French Bulldogs is typically caused by a change in diet or something else the dog ate that isn’t sitting well with them. It can also be exacerbated when they eat their food too quickly, causing air to end up in the intestines. What goes in must come out. Sorry.

Why do Frenchies Fart so Much More than Other Dog Breeds?

I don’t know about you, but I’ve been around many breeds and have yet to encounter one that farts as much or as badly as much as the Frenchie. This is due to their extremely sensitive digestive systems.

French Bulldogs are what is called a brachycephalic breed. Simply put, this means they have flat, smushed faces.

When these dogs eat, they tend to swallow a lot of air as well.

I’m using this bowl that forces my Frenchie to slow down when she’s eating. It keeps her busy and less gassy!

If you want to learn more about slowing down your Frenchie’s eating and slow-feed bowls, check out our guide.

10 Reasons Why Your Frenchie is Farting

Diet is the number one cause of flatulence in French Bulldogs, but there are a few other reasons why your Frenchie could be having gas.

For Frenchies, another one of the leading causes of gas is swallowing too much air.

If your Frenchie inhales their food in seconds, consider getting a bowl that makes them work for their food.

Some commercial, processed dog foods just contain too many carbohydrates.

Our diets also have too many carbohydrates (most of us) for your Frenchie… just another reason why you shouldn’t share your table scraps with your Frenchie.

2. Diets that are rich in fat or fiber

Fiber is one of those ingredients that our digestive systems simply cannot digest. Instead, the fiber works by retaining water, slowing digestion to aid nutrient absorption, and promoting healthy stool development.

Foods that are high in fiber often take longer-than-normal for your digestive system to process, which causes them to ferment and produce gas.

Beans, cabbage, cauliflower, and broccoli are a few examples of fermentable foods.

No matter what you do, don’t share these with your Frenchie. Don’t say I didn’t warn you!

Believe it or not, just like us humans, some dogs are actually lactose intolerant. Even in dogs whose stomachs can handle dairy, it still might make them gassy.

As delicious as they are, spicy foods are definitely a no-go for your Frenchie.

Do you have a bag of dog food that’s been sitting around for some time?

Check and see if it’s expired! If it is, you should check out our Top 5 Favorite French Bulldog Foods. I’m sure you’ll find something that works for your Frenchie.

Just like us humans, when we eat junk, we feel like junk… the same is true for our Frenchies.

8. A food ingredient that their stomach doesn’t tolerate

Sometimes their digestive systems just can’t tolerate some ingredients in their food. If you’re feeding your Frenchie chicken, try another source of protein for their diet and see if that helps their gas.

9. Lack of exercise and obesity

Frenchies that are overweight are at a much higher risk for chronic gas. For both you and your pup’s health, keep them at a healthy weight.

Because of French Bulldog’s flat faces, they’re prone to swallowing air while eating. As you could imagine, this causes some pretty bad gas.

When your Frenchie eats so fast they practically inhale their food, the problem is only worse. There are bowls designed to slow down dogs that are fast eaters for this exact reason.

Other Causes of Flatulence in Frenchies

There are other, uncommon causes of gassiness that could be to blame.

If your Frenchie’s diet is up-to-shape and you can’t think of any other reasons why they’re so gassy, consult with your veterinarian.

Here’s a list of some foods that some dogs have trouble digesting.

It wouldn’t hurt to completely cut out these foods; your Frenchie shouldn’t be eating human food anyways!

Why Does my French Bulldogs Farts Stink?

Don’t expect any farts to smell pleasant. Sometimes your Frenchie’s farts may be especially stinky.

Why is this? It’s usually due to a change in their diet or something else they ate.

The foods in the list above are known to cause extra-stinky farts, so it’s best to avoid them at all costs.

How to Stop my French Bulldog from Farting

The first step in treating a French Bulldog suffering from flatulence is usually a change in diet. There are many dietary factors that could be contributing to the gassiness.

If changing your Frenchie’s diet doesn’t reduce the gas and issues such as inflammatory bowel disease have been ruled out, there are a few medication options that you could discuss with your veterinarian.

Probiotics have been shown to reduce gassiness by aiding in digestion and inhibiting the growth of deadly bacteria such as E. coli or salmonella.

It’s important that you get a probiotic designed and tested for dogs because of the differences in their digestive systems compared to humans.

Medications and Supplements for a Farting Frenchie

Disclaimer: Be sure to ask your veterinarian for their opinion before starting any supplement.

This is a herb that helps reduce flatulence and bloating.

Zinc acetate is a dietary supplement that has shown promise in reducing that nasty, pungent fart smell.

A plant that is found in deserts around the world. It was used by Native Americans as a medication for headaches, bleeding, and arthritis. It is a natural deodorizer and can help your Frenchie to stop stinking!

Better known as Pepto-Bismol, this medication can relieve indigestion, vomiting, and diarrhea in both humans and dogs.

An anti-foaming agent that is used to reduce bloating, discomfort, or pain caused by excessive gas.