These vegan brownies are incredibly fudgy and SO chocolatey. Plus, they are a little bit healthier than most brownie recipes.

They’re rich without butter. Fudgy without eggs. And they even have that crisp, shiny brownie crackle that everyone loves ❤️

Welcome to the wonderful world of Vegan Brownies.

This past week I’ve been running a brownie marathon – is that a thing?! I had a big task. To make a delicious chocolate brownie WITHOUT using butter, eggs or milk. I won’t lie, it took a while to get there.

But after eating brownies morning to night, I can safely say, it is possible. And the results are EPIC!

These Vegan Brownies are AMAZING and seriously rival a regular brownie. I KNOW. Can you believe it?! They have chewy edges, a fudgy choc centre and even a crackly top that makes you want to dive face first into the pan.

You’ll see above that it took 6 tries to get these Vegan Brownies just right. Sometimes the hardest recipes to crack yield the most delicious results. You just need a little gumption – and a really good dishwasher.

So like my Dairy Free Brownies, these Vegan Brownies use oil as their main fat rather than butter. But what to do about the eggs? I knew I wanted to create brownies that didn’t use any sort of weird egg replacement, so it would easy for people right across the globe to make them.

So I first tried an oil-based brownie recipe just without eggs to see what happens. They tasted good, but fell apart. Next, I tried adding apple puree. These brownies held their shape but surprisingly went a little rubbery. Next, I tried adding a little melted chocolate and reduced the amount of almond milk. They were the worst of all – flat and oily!

Then I tried adding almond butter but they were meh! I started to get a little desperate at this stage and my fridge was overflowing with below-average brownies.

Version 5, I switched from a cocoa-based brownie to using real chocolate, while also reducing the oil and increasing the almond milk. The flavour and texture were much better but they were almost cake-like. Not cakey but actual cake. Finally, I tweaked the measurements and version 6 was pure perfection. 👌🏻

These Vegan Brownies are soft and cakey if you enjoy them straight from the oven. But if you want them uber-fudgy like pictured, then leave them in the fridge for a few hours. It helps them to ‘set’, hold their shape and get stick-to-your-teeth kinda fudgy. I like them both ways.

HOW TO MAKE VEGAN BROWNIES

HOW TO STORE VEGAN BROWNIES

Did you make this recipe? Don’t forget to rate the recipe and leave a comment below. 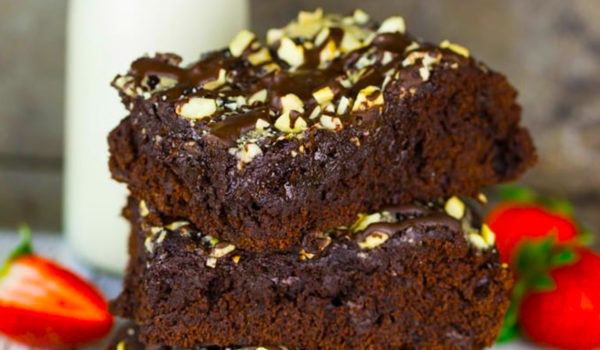